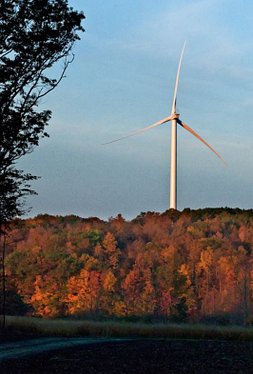 Howard's remoteness from any navigable rivers or railroads made it a poor location for any sort of manufacturing enterprise.  Large dairy farms thrived, as did businesses devoted to meeting the needs of the local residents.  Early establishments included post offices, blacksmiths, saw mills, carriage shops, general stores, taverns and inns.  Most of these were located near the "village" of Howard, as the concentration of houses at what is now the intersection of Counnty Route 70A and County Route 70 came to be commonly (though never officially) known.  One of the most important industries to arrive was the grist mill established by William Goff sometime between 1812 and 1816.  Records credit Goff with saving the people of Howard from starvation in the winter of 1816 with his distribution of flour and grain.

The population of Howard grew throughout the early 1800's.  The first religious service was given by Reverend Samuel Parker in 1810.  Several churches were built, including Episcopalian, Wesleyan, Presbyterian, Baptist and Methodist.  The earliest property taxes were levied in 1815.  The first school was created in 1815 and soon 16 seperate districts were identified with a schoolhouse serving each one.  The organization of a library, a volunteer fire department and a highway epartment followed, some years later.  The townspeople have aided in every major war effort with several citizens serving in the military.  One hundred sixty men from Howard served in the Civil War.

The census of 1840 reported 3,247 people living in Howard.  The population began declining soon after the Erie Railroad was built and its primary maintenance facility located in Hornell.  Several forward thinking citizens relocated from Howard to Hornell to take advantage of the increased trade and traffic.  Despite this, businesses in Howard continued to prosper for some time.  There were barber shops, general stores, gas stations and hotels.  The large dairy farms supplied milk to several local cheese factories.  Later, with the introduction of automobiles and the construction of several roads, it became easier to travel to larger towns.  More poeple chose to shop in Bath and Hornell, so buisinesses in Howard suffered.  Farmers had the abilitiy to ship their milk significantly farther away and the cheese factories shut down.  Small schoolhouses were closed as students were sent to larger unified schools in neighboring communities.

Today, the Town of Howard is a lovely farming and residential community encompassing 60.7 square miles.  The population sits steady with 1467 residents reported in the 2010 census.  In 1976, the Howard Historical Society was formed adn the first Old Home Day was held.  The Historical Society devotes itself to collecting, preserving and recording the history of the Town of Howard and Old Home Day is held every summer to celebrate its rich heritage.

BUSINESS IN THE TOWN OF HOWARD

The main business pursuits in the Town of Howard are agricultural.  These include dairy, crop and beef farms.  In addition to cattle, farmers raise horses, sheep, goats, chickens, rabbits and pheasants.

Other trades in the Town of Howard include lumber, meat processing, gravel excavating and landscaping.

After several years of review and planning by the Town Board and Planning Board, a permit was issued and construction of the Howard Wind Farm was undertaken by Everpower.  The project was completed in December of 2011.

The total capacity of the 27 turbines is 55.35 Megawatts.  Using actual production figures of about 28%, that relates to enough energy to supply 18,850 homes annually.

The town, county and school districts involved have benefitted from PILOT payments enabling the Town of Howard to actually lower town taxes while maintaining a healthy inventory of highway equipment and town services.

In addition to the PILOT and land-owner payments, the wind farm injects approximately one million dollars into the local economy through wages paid to seven full-time employees, as well

as goods and services to operate their office and maintenance programs.